This one was a real headache, it was completely dead with nothing on screen and no sound. After going down many different rabbit holes I checked the previous work that had been done which is the first thing I should have done. 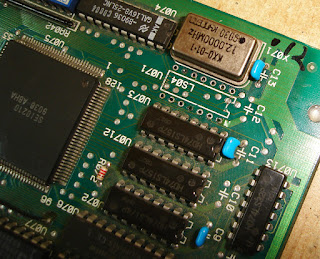 The 74LS04 at U071 had been socketed after removing the socket I could see quite a bit of damage, including the trace from pin 11 to 13 being broken. 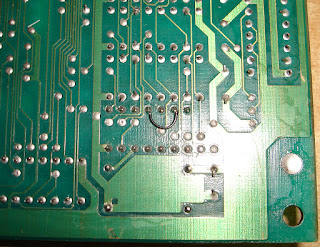 After patching the bad trace it would finally power up and display something, but there was no sync and no sound.

The sync issue was fixed by reflowing the SEI0200 custom chip. 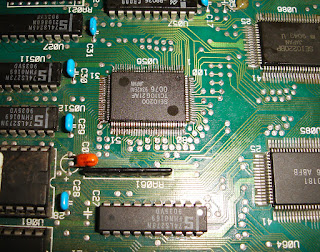 I also noticed the LS04 at U053 had been replaced with a HC04, it may have been okay to use a cmos chip here but I replaced it with the proper LS04. 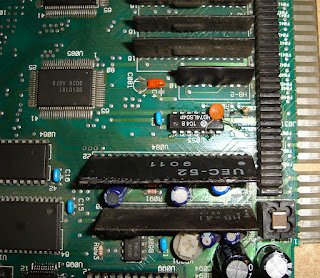 The only issue remaining was the lack of sound and the coin inputs not working. These are linked as the Z80 wasn't running which is the sound cpu and for whatever reason seibu also used the Z80 for the coin inputs.

The main sound eprom was bad but after replacing it the cpu still wasn't running. 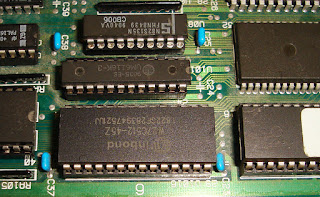 I next desoldered the Z80 and fitted a socket so I could hook up the Fluke 9010a and also test the cpu, the cpu was fine.

The fluke was reporting 'Data bits 0 tied' but tied to what? usually it will say ground, 5v or another line. According to a cource notes fluke pdf document I found online some combinations of shorts or when it's multiple lines the fluke cannot always identify them and cannot give you any more details.

Checking with a multi meter I wasn't able to find any shorted lines, I lifted the D0 pins on various chips and wasn't able to find the issue. I just had to start pulling and socketing stuff directly connected to the data bus after pulling the M6295 pcm voice chip the bus test on the fluke passed.

I have seen these fail quite a bit on CPS1 motherboards but never like this where it kills the data bus. It looks like they are getting very hard to find now too. A couple of sellers in China have them but they look remarked so who knows what they really are. Luckily I had a couple of working ones in my spares drawer pulled from scrap boards. 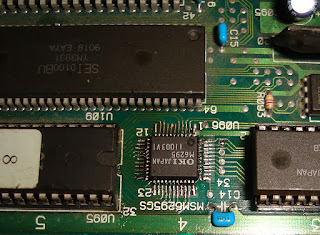 M6295 fitted and the sound and coin inputs are now all working.